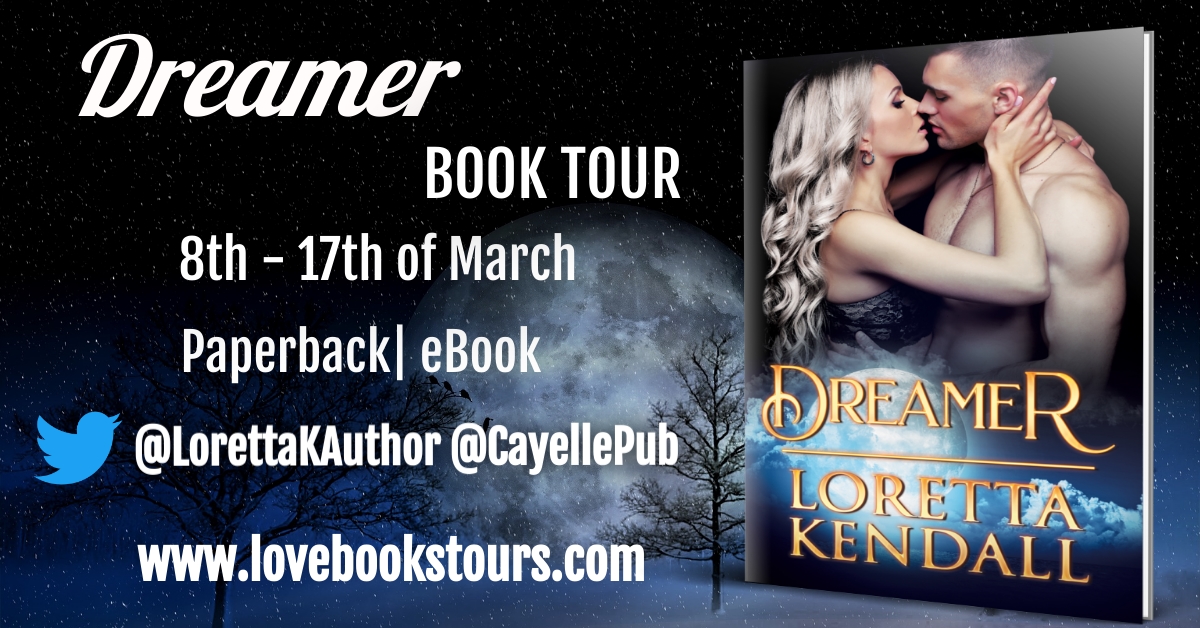 Welcome to my stop on the Dreamer book tour!
Want to visit the other tour hosts? Click here

Luna suffers from an undiagnosed illness causing hallucinations and blackouts that have plagued her for years. The root of her bazaar illness comes to light when she meets her pro-wrestling hero, Gunner Cain, and his wrestling faction friends, The Tribe. Luna discovers her romantic connection to Gunner isn’t just a fangirl crush, he is her eternal soulmate.

Gunner wants Luna to become his Alpha dreamer mate, for as part of a prophecy written in the Lycan Oracle, Luna must choose to bond to the Alpha of the Tribe, or all will be stuck in wolf form, forgetting their humanity forever. Luna learns the steps they must take to complete the bonding ritual could also end a centuries-old curse, saving lone wolves abandoned by their packs and plagued with the dreaded Lycan fever. Gunner’s connection to Luna is more than prophecy fulfilled; it is hope for Lycan kind in this steamy shifter tale of prophecy and romance.

As an Amazon Associate, I may earn commission from any qualifying purchases made from Amazon through links on this website.

Dreamer has a fairly unique premise – we have a woman who is a major fangirl of a bunch of professional wrestlers, who unbeknownst to her are lycans, and one of them also just happens to be her eternal soulmate. Throw in a prophecy with a due date for them all to get stuck forever in their wolf form, and voila! This is not your standard type romance.

Luna has suffered from blackouts and hallucinations for a long time, but doctors have no idea why. We readers find out fairly promptly what the problem is though – it is all to do with her connection to The Tribe, a group of Lycans that she is tied to as part of a prophecy. Luna doesn’t know about Lycans though, nor does she understand what the binds between them all are. All that she knows is that she is totally drawn to Gunner Cain, pro wrestler, who she has been watching as a fan for years. She has been dreaming about him – vivid, realistic dreams, that sometimes go so far as to become hallucinations.

When we first meet Gunner he has never met Luna, but he knows her through her dreams. This is because he can see them too (but Luna doesn’t know this). Gunner has been connected to her for 8 years, so he is already in love with her before they have even met. Along with the other members of The Tribe, who are all aware of the dreams that Gunner is part of, they have been looking to find Luna. They need her, as without her there is a cut-off point that as per the prophecy, they will all be stuck forever in their wolf forms.

Luna is an odd character. She is stalkerish, totally obsessive and bordering on creepy in her fixation with Gunner. But somehow, Loretta Kendall has managed to sell this to me as being totally reasonably behaviour and nothing to worry about. This is probably because Gunner at no point ever questions it himself. I wasn’t totally buying it (at times I was shaking my head and wondering why Gunner wasn’t running away screaming from the crazy woman), but for the most part, her weirdness suits the story. There were times though, especially in the first half of the book, where she did get a bit childish and annoying. This especially shows through in her interactions with her brother and his horrid girlfriend. (She put hair remover in place of the girlfriends shampoo…) But by the latter part of the book Luna has really grown a backbone and become quite a strong character, which drew me to her more.

I liked Gunner. He, too, is not what I would call completely ‘normal’, but he isn’t nearly so close to nuttiness as Luna is. He treats Luna very well and tries hard to protect her from the dangers that surround them (thanks to lone wolves who can ‘smell her pheromones’ – ick), while trying to ease her into understanding her place in what is going on around them. He shows his feelings for her right from the beginning, but as Luna is so obsessed with him, she doesn’t find it odd at all that he is calling her ‘love’ and being quite attentive, even as an almost stranger.

Some of the story progression in Dreamer moved at a very rapid pace. At times, we were just told that this, that and the other had happened, and it was a bit like being given a shove and told to hurry up and move along. I would have liked to have been ‘shown’ rather than ‘told’ about some sections. But for the majority of the story, the background of the fairly detailed premise is fed to us at a good pace. There is a whole lot going on, but it isn’t hard to keep up with. And I was glad that Loretta Kendall managed to keep track of all of the different things at play and tie the whole lot off – no loose ends left dangling to annoy the reader!

I did find myself laughing while reading this book one night, which made my husband think I was being quite weird. There I was, sitting on the couch reading this book about Gunner and his fellow wrestlers, with my husband sitting next to me watching WWE on the telly! The rubbish and smack talk from the tv show in the background certainly did ad an extra dimension of atmosphere to the book!!

Overall, I did enjoy reading Dreamer. It was a bit weird, and definitely odd, but it kept me entertained. And it was fun that the story was set to the backdrop of professional wrestlers.

Thank you to Loretta Kendall and Love Book Tours for sharing a copy of this ebook with me.

Loretta Kendall is a professional image consultant, writer, and author of the new novel Dreamer. She started her life with a daydream and a story in her mind. As long as Loretta can remember, she was a storyteller sharing stories with her friends from her overactive imagination. After twenty-two years as a talent manager, professional makeup artist, and photographer for the entertainment industry, she revisited her love for storytelling.

Loretta is a hopeless romantic and lives for a good happy ever after. Her husband must agree because they have had twenty-four years of wedded bliss. When she isn’t reading or writing steamy stories, she’s probably singing, watching pro wrestling while yelling at the TV, or spending time with nature.